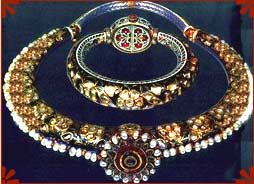 Kolhapur is popular for its cotton textiles, in particular Kolhapuri sarees. This city is also popular for its jewellery and leather sandals or Kolhapuri chappals. Here chappals of good quality are available as cheap as five pairs of sandals for less than Rs 500.

Kolhapur is famous for its special type of necklace called Kolhapur saaj. This jewellery is very much special for Maharashtrian women. Har and malas, mohanmal, bormal, chaplahar, kolhapuri saaj, pohehar and putlihar are the jewelleries that are made in Kolhapur. These names are derived from the peculiar shapes of the jewelleries. Thushi, a choker with closely bound tiny gold beads, is very popular in Kolhapur.

Mahadwar and Shivaji Roads are regarded as good places to shop. Tourists can find a good variety of Kolhapuri chappals and other leather goods on Bhausinji Road. One can also shop around the bus station in the Rajarampuri area. Shetkaari Bazaar is the cheapest place to shop.