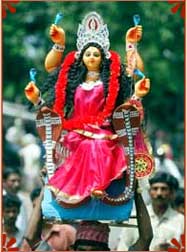 Battis Shirala is a hilly town with thick forests having a wide species of snakes ranging from the deadliest king cobra to the rare species of pythons. Youths get into nearby jungles and persuade snakes out of it a week before the festival. Thousands of tourists including foreign tourists are attracted by the snake show organized during the festival.

Nearest airport is at Kolhapur, 50 km away from the Battis Shirala, while nearest railway station is also at Kolhapur. This place is well connected by road as well. Hotels are available at Kolhapur or Sangli.