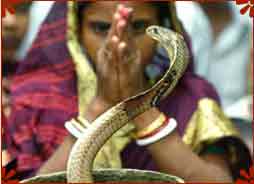 Cobra has a special significance in Hindu mythology. Nag Panchami is celebrated to worship snakes. It is a festival in the honour of the Snake God, Shesha Nag. People worship snakes by offering milk and Puja. Snakes are worshipped since Vedic eras as they protect crops from getting damaged by rats and other rodents. Snakes are also a part of the Puranas, they took part in 'Sagar Manthan', and is also worn by Lord Shiva around his neck. Nag Panchami is celebrated in the month of Shravan (July-August) according to the Hindu calendar.

The victory of Krishna over the Kaliya snake is also remembered on this day. For this reason, Krishna is known as 'Kaliya Mardan'. The festival celebrates during the rainy months. It is believed that the festival is to counter the increased possibility of snakebite during this time. People visit temples specially dedicated to snakes. Shiva temples are also crowded during this festival, as snakes are considered dear to him.